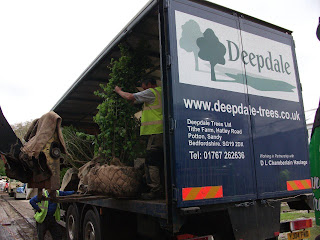 7.30 start – the key to the tool box is missing and we can’t move the digger because it’s key is in the box….however, this delay was really helpful as our garden area is officially marked out and the extra 50mm grass strip included that we had originally omitted, so that would have put a lot of measurements out.
Forgive me for getting philosophical but sometimes I think things happen for a reason…..

Deepdale arrives with the trees at 9.30 and we decide to put the far corner tree straight in as its root ball will be under the curved wall footing and it is in the centre of the group of gardens. A bull finch briefly enjoys it’s branches and looks down on the otherwise empty muddy plot. 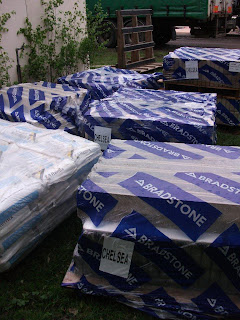 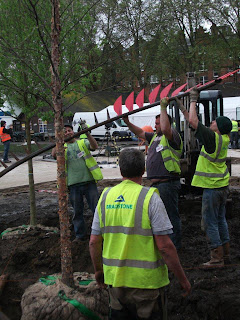 I fix the top two perspex sections on and we set out the garden according to my plans using strings and levels. The team excavate most of the site to around 700mm and we spend time precisely locating the centre of the garden, the specimen Betula nigra location, the centre for the base of the sculpture, so that the sculpture encircles this key tree and looks right from all angles.

We attach the lower sections of sculpture (minus perspex leaves for fear of damage) and then the upper sections. 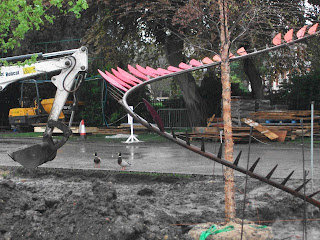 It rains hard for half an hour and most people seem to down tool;, a pair of ducks look on amused and try out the impromptu pond that has appeared in my plot!

In a last push for the day we mark out the location of the wall footing and nearly forget the 50mm grass strip again!!!! These go in and we decide to call it a day at 7pm. I plod back to my accommodation feeling tired but fairly pleased with progress.

All text and images are copyright of Caroline Butler
We use cookies on our website to give you the most relevant experience by remembering your preferences and repeat visits. By clicking “Accept All”, you consent to the use of ALL the cookies. However, you may visit "Cookie Settings" to provide a controlled consent.
Cookie SettingsAccept All
Manage consent

This website uses cookies to improve your experience while you navigate through the website. Out of these, the cookies that are categorized as necessary are stored on your browser as they are essential for the working of basic functionalities of the website. We also use third-party cookies that help us analyze and understand how you use this website. These cookies will be stored in your browser only with your consent. You also have the option to opt-out of these cookies. But opting out of some of these cookies may affect your browsing experience.
Necessary Always Enabled
Necessary cookies are absolutely essential for the website to function properly. These cookies ensure basic functionalities and security features of the website, anonymously.
Functional
Functional cookies help to perform certain functionalities like sharing the content of the website on social media platforms, collect feedbacks, and other third-party features.
Performance
Performance cookies are used to understand and analyze the key performance indexes of the website which helps in delivering a better user experience for the visitors.
Analytics
Analytical cookies are used to understand how visitors interact with the website. These cookies help provide information on metrics the number of visitors, bounce rate, traffic source, etc.
Advertisement
Advertisement cookies are used to provide visitors with relevant ads and marketing campaigns. These cookies track visitors across websites and collect information to provide customized ads.
Others
Other uncategorized cookies are those that are being analyzed and have not been classified into a category as yet.
SAVE & ACCEPT